Solar Water Pump Systems: What really makes them so special? 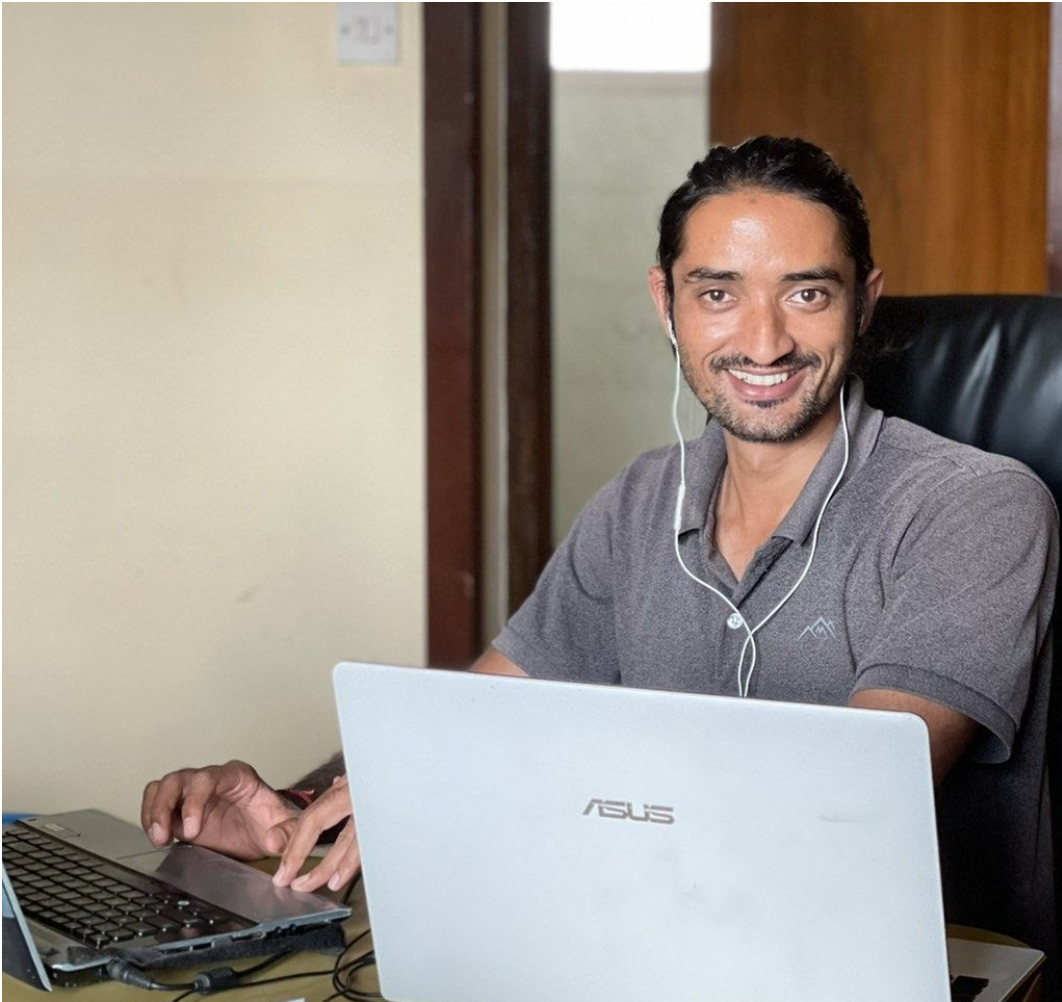 Farmers in Nepal face some of the toughest challenges when it comes to irrigation with only 4.4% of the total 13.4 Million Nepalese farmers having access to alternate irrigation sources like diesel-run generators or solar grid-connected pumps. By introducing a solar water pump system in the agricultural market of Nepal, Gham Power (GP) has leveraged its expertise in the renewable energy sector. Combining it with proprietary algorithms to provide customized data-based solar irrigation solutions to provide a cost-efficient water pump compared to a diesel-run or an electric pump. This has been an impressive journey for the company and one such individual who has been an integral part in witnessing this journey and contributing to the growing portfolio of farmers served by Gham Power is Mr. Kiran Timilsina.

Kiran had joined Gham Power back in 2019 as an agri-analytics and advisory officer. With an educational background and technical expertise in agriculture, Kiran describes his desire to come into this field, “I wanted to spread my knowledge among the needy farming communities of Nepal for raising their living standards.” Back then GP had introduced the solar water pump system (SWPS) and had been evolving to a digital ecosystem to deliver its services and measure impacts among its end-users. Kiran with similar interests in evolving digital things and trends decided to join GP with a role that entailed him to supervise the agri-advisory services for the farmers who are using products of GP. Simply put, Kiran was now in charge of communicating with the farmers to understand their needs, deliver the agri-advisory services on a need basis and assess the impacts created among farming communities with the use of SWPS. It was him who had to help these farmers to devise and plan an improved strategy to use their newly-acquired solar water pump systems. The plan would be to use the improved irrigation in producing a better harvest and ultimately increase the income for these farmers. As Kiran described what his goals were, we wanted to know more about the whole process and what the journey looked like so far.

“When I started working at Gham, the only product was SWPS. Slowly we rolled out our agri-advisory as a value-added service which resulted in a steady rise of income for the farmers.” The journey for a farmer starts with onboarding to Gham as a registered SWPS user. As Kiran describes, the process can take various forms. In cooperation with NGOs and Microfinance Institutions (MFIs), farmers in the rural province are informed about the opportunities of solar-based irrigation systems. A reliable and affordable alternative to diesel-powered systems, farmers are informed about the possibilities and interested farmers are later connected to Gham Power by Microfinance (MFIs). In addition, Kiran says, “Farmers these days with the penetration of smart mobile phones are being tech-savvy. We are also able to collect interests through our social network platform. In addition, one of the most significant tools in drawing new farmers has been the success stories and testimonials of our existing users. Sharing these have generated a significant response.” Once the farmers are boarded to the GP SWPS program, the MFIs can process the farmers by securing an arrangement with a 5% down-payment to install the pump. The system is installed by GP and paid for by the MFI whereas the farmer is conveniently able to pay back for the system through monthly installments.

To explain his role, Kiran emphasized that this is where he and his team come in. “When the farmers have the systems installed, it is our job to ensure that they can keep on paying the installments regularly. The agri-advisory services provided support to the farmers through calls, internet meetings, field visits, and training. The goal was to help farmers improve and develop their cropping patterns and practices, diversify with higher-value crops, and access other forms of agricultural activities.” The farmers availing the agri-advisory services receive custom-tailored plans for harvesting according to a farmer’s financial capacity. “The SWPS program is targeted for all farmers including marginalized and small-holder farmers but we usually see that mid-sized and large-scale farmers mostly show interest towards our product because of their investment capacity.” This, as Kiran explained, was the result of a combination of a few factors. “Firstly, the small marginal farmers are really poor and do not even own the necessary credentials to get enrolled into the MFI program. They usually see more risk than opportunities while taking loans from MFIs and also fear the inability to pay back the resulting monthly installments. Also, they are harder to persuade as they are not aware of these types of tools and are highly risk-averse. Additionally, in some of the cases, interest rates from MFIs were not helping the cause in any way.”

The success stories witnessed by Kiran as a part of Gham Power have been substantial as he mentions. We completed over 60 projects between 2019 and 2020 and have extended the partnerships with additional MFIs that enlighten the scope for scaling up SWPS in the future. The agri-advisory after being introduced as a value-added service saw farmers who were focused only on paddy and grains diversifying their farms with vegetables and other high-value crops. Fish farming was an obvious choice for many farmers who could afford the cost and Kiran states that this has helped to meet the growing demand of the domestic consumer market for fish. To dive a bit deeper into the impact of such combined services provided by GP, we inquired about the mechanism for assessing the impact generated through their program. “We collect the data from our farmers periodically which lasts for 3 months. The surveys conducted are compared to the last season’s one to calculate the growth and measure the different parameters to assess the impact.” Kiran provides an estimate that Gham Power has surveyed around 60 farmers in the last 2 years where farmers were able to increase their income on average about 30% to 40% after the installation of the services. Combined with agri-advisory services and access to different kinds of farming, the income level has increased to anywhere from 40%-80%. "The increase in income is generally attributed to two sources. The first being the increase in yield owing to better cropping patterns, efficient farm management, and better knowledge. When I went out in the fields and talked to the farmers to actually investigate the need. I got to know that what they really wanted was the access to knowledge and technical expertise to become a commercial farmer. Thus, introducing the advisory service was something that helped us achieve a product to create maximum impact for the end-users of our SWPS.” Higher output and yield along with dynamic market information provided by GP leads the farmers to earn more from their sales and ultimately increase their landholdings. The impressive figures are a testimonial to the success stories of the SWPS but Kiran rightly points out that Gham also works with the farmers who are unable to pay the installments on time to figure out what is wrong and how they could be helped to use their resources efficiently for achieving an estimated harvest.

Access to a reliable source for irrigation is an integral part of any agricultural harvest. With the system installed by Gham and the advice provided by Kiran and his team, things have usually looked good with positive results. So, while investigating the failures it is always crucial to focus on the cause. In recent times, Gham has also introduced smart meters for the pumps and IoT-based sensors to remotely measure the field data from the farms. “Our farmers can now choose to install these sensors allowing the option to monitor everything from temperature, humidity to soil conditions in the fields. This allows for more accurate advisory services and better planning. GP offers the basic service for free to the farmers who choose to install these sensors and smart meters (for the SWPS) in the farms. The business model for the farmers is clear as Kiran believes and is a commercially viable and sustainable one. Expressing his views on the trend of subsidies provided for the market by the government, Kiran says that these can be a distraction for the market development as the process is a tedious one. Apart from taking a long time, the competition is huge and often the process can be riddled with implicit favoritism. “We as GP are now trying to work with the MFIs to do the projects without chasing for the government grants and subsidies. But for scaling up the project for small-holder farms, government subsidies will be essential to provide the support where MFIs will fall short.

Plans for the future

We wanted to know if Kiran thought that there were other things that held back GP from scaling up to reach a higher base of farmers. “The newly introduced program of distributing electric irrigation systems by the government at subsidized rates is now a competition. Although costs will be similar to our product, the subsidized costs of per unit electricity consumed could be a crucial deciding factor. In addition, we have limited systems customized according to the water needs based on land size and crop planning for smallholder farmers. So, a lot of big farms with high irrigation requirements are unable to install our systems as they can be quite expensive for the bigger ones.” These issues as Kiran informs are being addressed by Gham actively and the plan as he sees it is to install thousand more systems within the next couple of years. “Well, the planned goal is not that high or impressive, to be honest, and can be realistically possible. It can be increased more if we can spread this to marginal and smallholder farmers. In this case, foreign grants or support can play a major role. In addition, change in future government policies to encourage irrigation systems based on renewable sources of energy instead of diesel and other non-renewables can highly boost the number of SWPS.”

As we were at the end of our interview, Kiran is positive about the developments in the sector. “The positive impact stories and improving income and living standards are the proof of the program’s success. I hope that the increasing focus on SDG goals, government interventions, and an optimistic outlook will be able to accelerate the future growth for the solar irrigation sector in Nepal.”

Solar with Storage: The future for renewables in Nepal